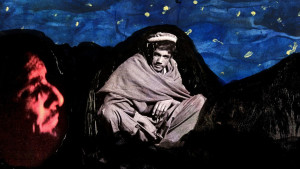 The unusual life of Polish anti-communist Adam Jacek Winkler is reanimated in a stylistically brilliant animation film based on Winkler’s drawings, photographs, and diaries. Winkler leaves his home country and settles in Paris; he is an ardent, impulsive and cynical adrenaline addict. When a war in Afghanistan begins, Winkler finds a common ground with the mujahideen and fights alongside no other than Ahmad Shah Massoud himself. Upon his return to Europe, Winkler, being a dedicated mountaineer, goes on an attempt to climb the mountain he had dreamed to conquer all his life. And there, on the Magic Mountain, is where his life comes to an end. “The Magic Mountain” is Anca Damian’s second animation, and the second film in the ‘heroic trilogy’ started by “Crulic: The Path to Beyond” (2011). It received a Special Jury Mention at the Karlovy Vary International Film Festival