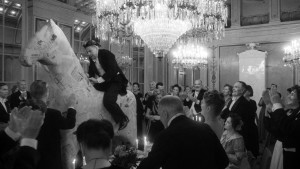 The protagonist of the Swedish master Jan Troell’s biographical drama is Torgny Segerstedt, a journalist known for his uncompromising stand on Nazism at the time when most of his contemporaries preferred the diplomatic approach. Segerstedt was a tireless critic of Sweden’s neutrality, which earned him quite a few enemies in his lifetime. His private life was no less defiant – although being of considerable age, the married journalist fell in love and began an affair with the wife of his friend and publisher. This is a story of how to maintain a lust for life until the last written word and the last kiss. Troell’s films are distinguished for their attention to detail and use of natural metaphors. The lead is played by the master of Swedish acting school Jesper Christensen, who has just been filmed in the latest Bond movie “Spectre”.