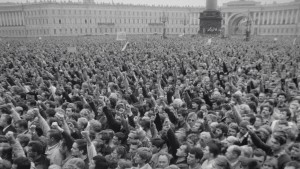 Leningrad, August 1991. TV broadcasts “The Swan Lake”. City streets fill with anxious people. There are rumours a coup has taken place, but there is no sure information from Moscow. The crowd does not know yet that this event, the so-called August Putsch, will become a historic breaking point, the beginning of a new era of drastic changes and the collapse of the Soviet Union. Sergei Loznitsa’s (“In the Fog”, “Maidan”) latest documentary uses archive footage filmed during those days in August. One particularly interesting episode features the current Russian president Vladimir Putin. “The Event” can be also seen as the sequel to Loznitsa’s film from the last year, “Maidan”, which examines how history tends to repeat itself. Ukrainian-born Loznitsa is the author of 17 documentaries and 2 features. His “In the Fog” (2012), which, along other countries, was produced also by Latvia, received FIPRESCI award at the Cannes Festival.