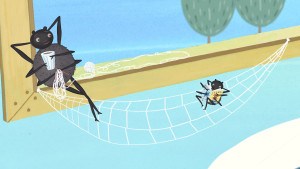 The film brings to life children’s poems that, through animal characters, tell us about a friendship between the biggest and the smallest, and their joint adventures. What if I were a big bat and you a little one, or if you were a little flee and I were a big flee. The film’s based on a popular Swedish children’s book by Lena Sjöberg, while the soundtrack was recorded by the lead singer of The Cardigans, Nina Persson.
The film programme is made possible thanks to the support of EEA Grants un Ministry of Culture Republic of Latvia.