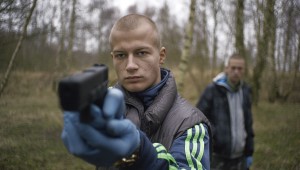 The Northwest district of Copenhagen is notorious for its high level of youth crime. The eighteen-year-old Caspar is a petty thief who sells stolen goods to a dealer named Jamal. When Casper gets a chance to join Bjorn’s rivalling gang he believes he will finally be able to escape poverty. His hopes are shattered by Jamal’s act of revenge, and the more Casper is sucked into the war of the gangs the more important it becomes to protect his family, especially his younger brother, whom he has recklessly involved in his own criminal activities.
This realistic criminal drama from the director Michael Noer, a Danish documentarist, is his second feature, which received the FIPRESCI award at the Goteborg Film Festival.