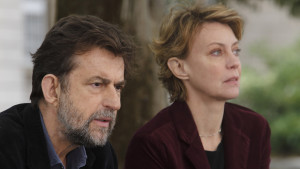 The films of Nanni Moretti, who could be Woody Allen’s Italian cousin, are tragicomedies of the everyday – they bring together humour, vulnerability, and a deep understanding of a human life, with all its joys and sorrows. In his films, Moretti is often autobiographical; although he has been making movies for almost 40 years, Moretti does not call himself a director. According to him, he makes a film only when he feels he has something special to say. This definitely rings true with his latest picture, “My Mother” – something that stemmed from the fact that during the shooting of his previous film “Habemus Papam” Moretti’s mother passed away. The film focuses on a character named Margherita, a film director, trying to retain control over her own life, struggling to deal with the charming while unbearable American star Barry (Coen brothers’ favourite John Turturro), her mother’s illness, and the coming of age of her daughter. “My Mother” is a moving story of coming to terms with an inevitable loss.