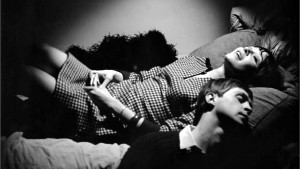 Claude is twenty-three; he reads and cycles a lot, is interested in politics, and tries to live aesthetically, but he is also lost in his own life. Barbara will soon turn twenty, she studies acting, believes she’s an optimist, wants to travel and live in Paris. Sometimes they eat brunch with their friends, a children’s book artist and a magician. Barbara would bring coffee and croissants, while Claude doesn’t take off his sunglasses even when reading a paper. They could be our contemporaries, but the young couple are the protagonists of Canadian director Gilles Groulx’s film “The Cat in the Bag” (1964) in which Claude and Barbara take turns to tell us the story of their separation. This ‘mockumentary’ is a bright example of “direct cinema”, the genre Groulx himself established, but it is also almost like a love letter to the revolutionaries of the French New Wave, especially Jean-Luc Goddard.