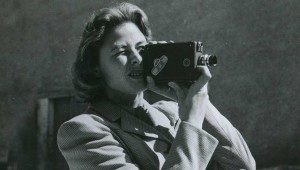 “My name is Ingrid and this is my story.” To create this documentary about the film icon Ingrid Bergman director Stig Björkman drew from Bergman’s diaries, letters, and the family film archive. Much of the footage featured was filmed by the actress herself with an amateur camera. Episodes with Bergman’s children playing under the Italian sun are shown along with flashes of photo cameras at film premieres and the streets of Rome where paparazzis are trying to capture the heroes of a new scandal, Bergman and film director Roberto Rossellini. The life of this courageous, talented and independent woman ahead of her time is narrated in first person by the actress Alicia Vikander. Björkman is the author of documentaries about film directors Ingmar Bergman and Lars von Trier. The idea behind the film about Ingrid Bergman belongs to her daughter, actress Isabella Rossellini.