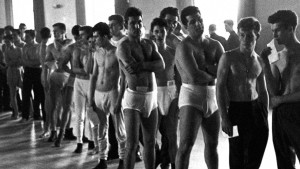 The Canadian documentary filmmaker Gilles Groulx’s dexterous and dynamic camera follows three amateur boxers while they prepare for a tournament called “Golden Gloves”. A victory in the brutal contest is their hope to break out of poverty. In sincere conversations the boys tell about their love of boxing, dreams, and ambitions. Groulx himself comes from a working class family, and in his films he has truthfully captured the bold Quebecois reality, becoming one of the best-known directors of the so-called ‘direct cinema’.