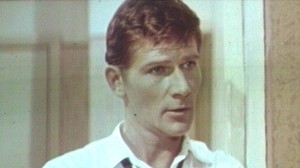 Cēzars Kalniņš, a telephone technician, spends his spare time composing songs for a band of amateur musicians. In order to perform, the band must go through an elaborate bureaucratic process of censorship to receive a permit. Meanwhile, Anita Sondore, a member of the censoring committee, hears some of the band’s songs at an improvised concert and decides to write a complaint. Later she softens her stance, but the bureaucratic wheel cannot be slowed down once it has taken pace.
A cinematic essence of the sixties; youthful maximalism and the voice of consciousness make the rebellious characters of Kalninš’s film take their rightful place among the stars of the international Nouvelle Vague of the decade. The authors almost with a precision of a psychic foresaw their own fate at the hands of censorship (the film was shelved for 20 years) when they so ironically played with the themes of hidden powers in the Soviet system. The first Latvian film to pay equal attention to music, employing Imants Kalniņš’ score as an independent character.