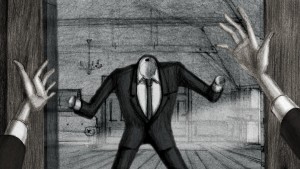 His own reflection in the mirror seemed so important to him until he no longer saw himself in it. Jurģis Krāsons is the most awarded production designer in Latvia, who occasionally turns his efforts to animation. He was nominated as one of the best newcomers for his first film “Black Box”. Krāsons’ second animation “To Swallow a Toad” brought him not only the Latvian national award “Lielais Kristaps” as the best animation director but also a chance to take part in the Cannes Festival’s short film program.